174 pounds of marijuana found in luggage at Atlanta airport 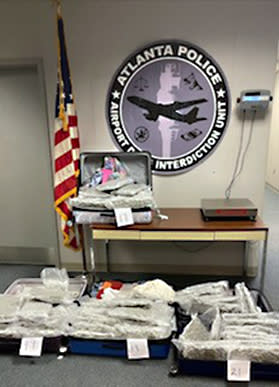 Officers found more than 170 pounds of marijuana in a suitcase. After a flight from Seattle lands at Hartsfield-Jackson Atlanta International Airport.

Atlanta Police Department’s Airport Drug Enforcement Unit It was discovered on May 26 when at least 5 pieces of luggage were on their way to collect them. The agency said in a statement on Friday.

Authorities then arrested four people who had retrieved their bags from the baggage claim area, according to police. Authorities said they eventually recovered seven suitcases containing 174 pounds of marijuana worth $700,000.

Nicole Golden, 47, was detained at around 5 p.m. ET after picking up a bag containing about 22 pounds of marijuana, according to the statement. Naly Tong, 29, and Keomanyvanh Tong, 33, were arrested at about 7:30 p.m. after Pick up each bag from the baggage claim area. The police department said both women had additional bags containing marijuana.

The three women have been charged with marijuana trafficking and are still being held at Clayton County Jail.

A fourth person, Jarvis Sheppard, was arrested at around 8:50 p.m. after receiving two suitcases from the baggage claim, police said. He had 63.28 pounds of marijuana, according to a statement.

Sheppard, 32, was charged with trafficking marijuana and was taken to Clayton County Jail. He was released Thursday morning.

The four detainees told police either someone else was packing their bags or that they were picking them up for someone else. According to Atlanta Police

“Our advice is not to travel with bags that don’t belong to you or bags you don’t know and think twice before agreeing to pick up someone else’s bag from airport pick-up,” police said in a statement.