Breaking News
Home / US / Bidens Tower over the Carters in a photograph during a visit to Georgia.

Bidens Tower over the Carters in a photograph during a visit to Georgia. 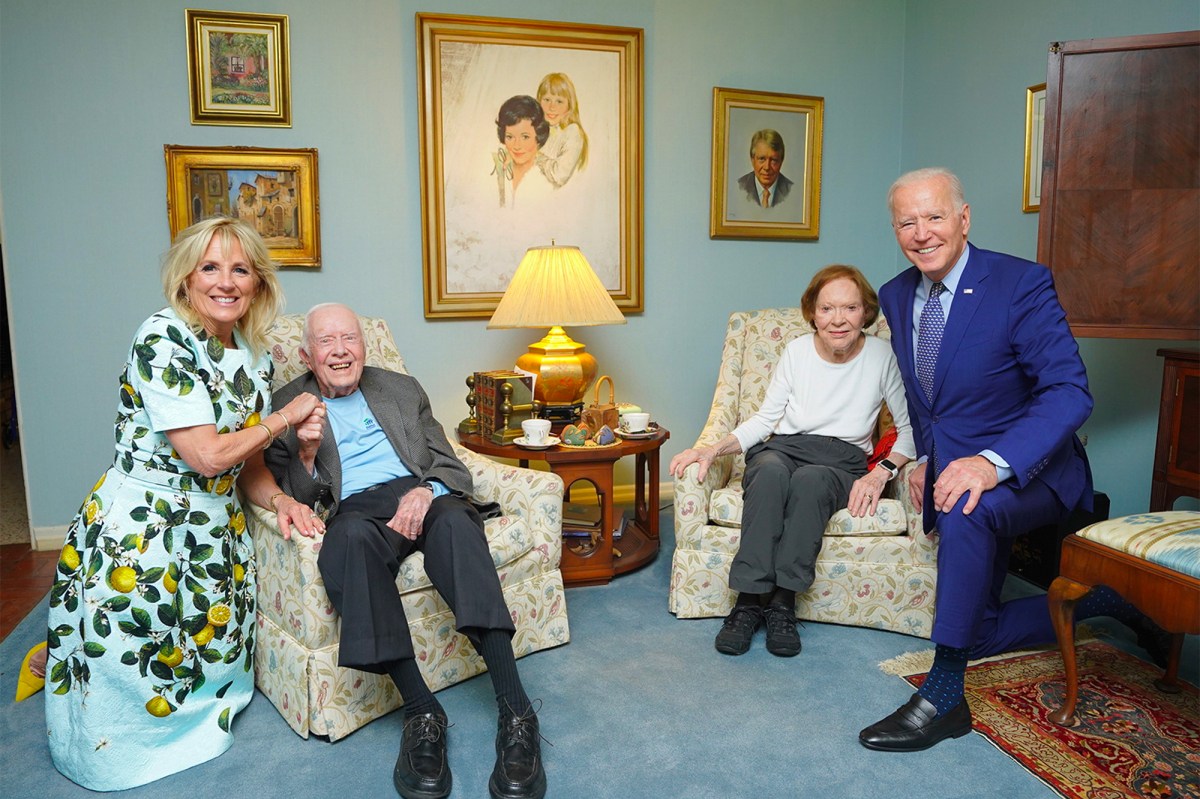 President Biden and First Lady Jill Biden pose with former President Jimmy Carter and former First Lady Rosalyn Carter during a visit to Georgia last week. But the angle of the picture makes it look like Bidens are towering above the tiny Carters.

The Carter Center released a photo of the two presidents and two first ladies taken during Bidens ‘visit to Carters’ home in Plains, Ga., On Thursday.

“We are happy to share this great picture from visiting @POTUS and @FLOTUS to see Carters in Plains, Ga.! Thank you, the President and Mrs. Biden! ”The center wrote in a tweet on Monday night.

This is the first time the two have met since Biden became president, as Carters did not attend the inauguration in January due to the coronavirus outbreak.

The four of them appeared without masks.

But pictures of the meeting of the two presidents caught the eye of critics as it was shot with a wide-angle lens, distorting the frame.

The president appeared at least twice the size of Rosalin Carter as he knelt beside her as she sat in a chair.

The same is true for Jill Biden and the former president.

Indicating that she was kneeling beside the chair, holding his hand. But she is bigger than him

Twitter users were baffled by the size discrepancy, suspecting that it had been digitally changed or it was put into a small house.

“We learned that Joe and Jill Biden can both play at the center of the NBA,” wrote conservative commentator Ben Shapiro.

“I’ve been staring at this picture for three hours and I have to go to bed tomorrow,” wrote Joe Seiders.

“Filed under ‘Why don’t we use indoor ultra-wide lenses,'” wrote reporter Jared Holt.

“We voted for Biden because he’s a great human being and has a good policy. But also because he and Jill are giants that will crush you if you piss them off, ”Sister Celluloid posted.

Another suggestion that the photographer was at fault.

“I guess the room is very small, so they have to use a wide-angle lens for everyone to come in. Choosing the right lens. But someone should fix the distortion in photoshop before it releases, ”wrote DemSwag user.

The press traveling with Biden did not enter the Carters home.

Rosalin said goodbye to the president as they left the house while her husband was still inside.

“It was nice to meet President Carter,” Biden said after the meeting. “It reminded me that I was the first to adopt him outside of Georgia. And we sat down and talked about the old days and he introduced me to his friends, the worshipers he wanted me to know, and Rosalin was great too. We had a great time We are old friends. “

The President and Jimmy Carter’s relationship goes back to the 1970s.

Biden began serving in the US Senate from Delaware in 1973, three years before Carter took office.