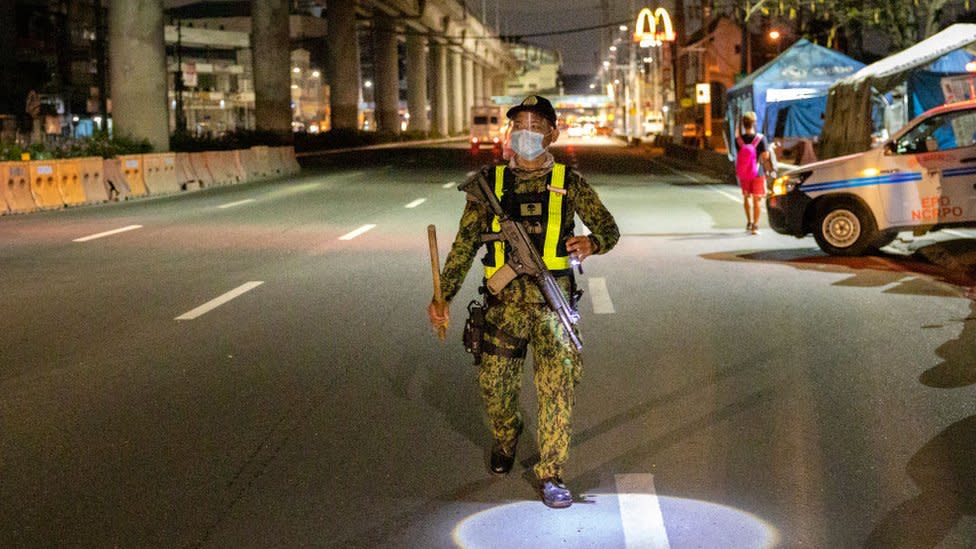 A Filipino man found in breach of quarantine rules has died after being ordered by police to do 300 squat-like exercises as punishment, his family said.

He collapsed the following day and died later.

The province of Cavite on Luzon is under strict siege to tackle the coronavirus outbreak.

General Trias City Police Chief Marlo Solero said there was no physical punishment for those found to violate the curfew rules, only staff lectures were given. He told local media that if officials were found to have enforced such penalties it would not be accepted.

The victim’s cousin Adrian Lucena announced his death on Facebook. He said Pena Redondo and others found to violate the curfew were ordered to do 100 squat-like exercises at once.

If they fail to do so at the same time, they will have to repeat the set, he said. The group ended up doing 300 exercises.

Mr Penaredondo came home at 6:00 am on Friday morning in agony, his brother said. His home-based partner told local news agency Rappler he was trying to move through Friday.

“All day he tried to walk, he just crawled. But I wasn’t that serious because he said it was just body aches, ”says Reichelyn Balce.

The next day, he collapsed and stopped breathing. Ms Balce asked neighbors to help him revive him. But it was reported that he died shortly.

Ony Ferrer, the mayor of General Trias City, said he had ordered the police chief to conduct a thorough investigation. He described the alleged punishment as “tortured”.

Earlier this month, Human Rights Watch warned that lawbreakers in the Philippines were being abused. Human rights groups said there were instances where police and local officials locked people in dog cages and others were forced to sit in the sun at noon.

During a televised speech on Thursday, President Rodrigo Duterte warned people not to violate the jail-termination rules, saying: “I will not hesitate. My orders are directed to the police and the soldiers and the village authorities. If there is any problem or any occasion there is violence and your life in danger, shoot them to death.”

Jobo: a rare tropical cyclone approaching one of Africa’s most populous cities.