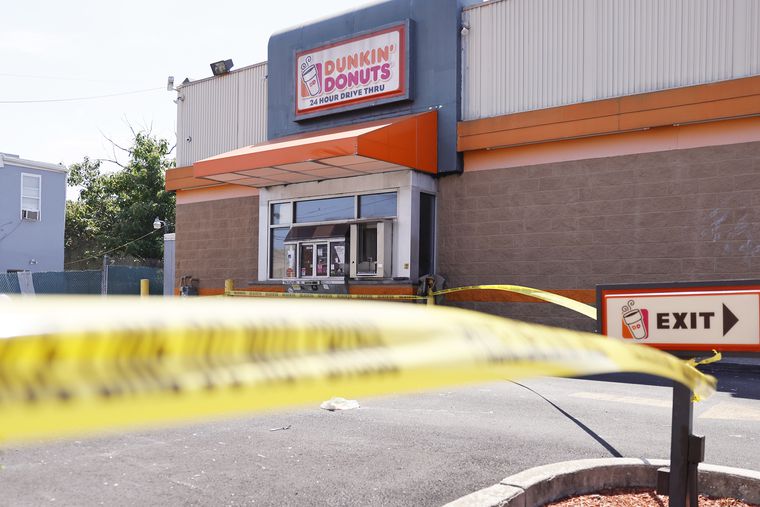 A Dunkin’ Donuts manager was shot dead on Saturday morning after a gunman confronted her as she opened a store in North Philadelphia, forcing her to go inside. and demanded that she give him all the money, police said.

The victim, a 41-year-old woman, was shot in the head at 5:51 a.m. inside Dunkin’ Donuts at Lehigh Avenue and Fairhill Street and doctors said she died there six minutes later.

Colleagues identified her as Christine Lugo, who lives in the neighborhood and although she has a child of her own. but also the mother of the person she worked with.

“She is an angel. She is the mother of all of us,” said Larry Evans, one of the few employees who stopped by the restaurant on Saturday afternoon to pay tribute to a colleague. “No matter who you are She takes off your shirt.”

The restaurant is closed on Saturdays. The parking lot and drive-through windows were enclosed with tape. while the police continue their investigation.

Calling the public for help, on Saturday afternoon, police released a nearly three-minute surveillance video showing the theft and giving the gunman’s face relatively clear. with a written description of his clothes.

man wearing a blue hoodie Gray cargo pants, gray New Balance sneakers, blue gloves and blue mask came up behind the manager as she was unlocking the front door around 5:23 AM when she opened the door. He grabbed her with his left hand while holding a revolver in his right and pushed her into the shop.

The next video shows them talking in the supply area. with the manager’s face blurred She waved pleadingly as she spoke to the gunman. Standing no more than two steps away from her, waving a gun, the picture shows them in a small office. which saw the manager sitting with what appeared to be a cash drawer on her lap. She gave the man an undisclosed amount of money. which he put in his left trouser pocket He then checked the watch on his right wrist before the video stopped. with a frozen face This was followed by his written description: Late 30s to early 40s, with a strong build, medium skin, mustache and goatee.

The displayed message said the gunman shot her in the head once and fled the store in an unknown direction. Ask anyone with information to contact the Homicide Unit at 215-686-3334, call the Police Department hotline at 215-686-TIPS (8477), or send an email to tips@PhillyPolice.com or message PPDTIP (773847) .

No one should approach the man but should call 911, police said.

Police said a $20,000 reward was offered for information leading to the arrest and conviction.

“All of us at Dunkin’ are saddened to hear that the restaurant manager has passed away. And we send our condolences to her family and friends,” the company said in a statement. “Franchise owners are fully cooperating with local authorities in the investigation. Because this is a police investigation. We hereby postpone any comments. More to the Philadelphia Police Department.”

The killings put an end to the overnight killings. This includes the deaths of three other murders. This included 13 shootings of a 16-year-old before 8:30 p.m. Friday 55th and Market Street in West Philadelphia. He was part of two shootings, with the 39-year-old being hit once in the right leg. The man had a stable condition at Penn Medical Center. Presbyterian, police said.

About two hours earlier, a 25-year-old man was shot in the chest once at 10th and Cumberland Streets in North Philly, police said. He was taken to Temple University Hospital. where he was pronounced dead at 7 p.m., police said.

And at 11:38 p.m., police said a man in his late 20s was shot multiple times while sitting in a car on Broad Street and Belfield Street in the city’s Logan county. He was pronounced dead at the scene.

There were no reports of arrests in any shootings.