Egyptian mummy is a pregnant woman, scientists first revealed in the world 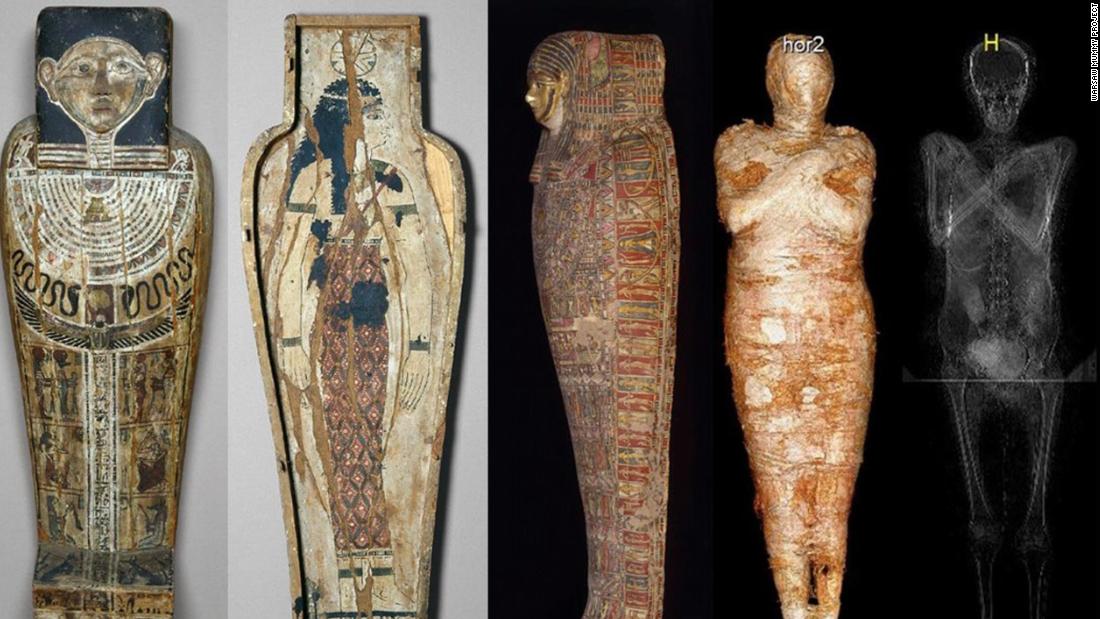 (CNN) – An Egyptian mummy, previously believed to be a priest, became pregnant.

The first surprising discovery in the world was made by Polish scientists at the Warsaw Mummy Project.
The team, which since 2015 has conducted a thorough investigation of human and animal mummies from ancient Egypt at the National Museum in Warsaw, has revealed the body’s true identity after scans revealed tiny feet in the abdomen.

According to Marzena Ożarek-Szilke An anthropologist and archaeologist from the Faculty of Archeology at the University of Warsaw, she and her colleagues have concluded their research and are preparing to submit the findings for publication.

She told the Polish state news agency PAP: “To my husband Stanisław, an Egyptian archaeologist, we looked at the last picture and noticed a familiar sight for the parents of three children in the abdomen of the woman who died: Little feet “

Archaeologists from the Warsaw Mummy Project examined the mummy that was previously thought to be a priest.

Wojtek Ejsmond, one of the three co-founders of the Warsaw Mummy Project, told CNN that the mummies were first brought to Poland in 1826 by Jan Wężyk-Rudzki.

At that time it was believed to be a woman. But that view changed in the 1920s when an inscription on the coffin was translated to reveal the name of Egyptian monk Horde J. Although belonging to the University of Warsaw But the mummy has been on loan to the museum since 1974. Fri 2460, which is the venue for display

During the research, the team revealed an interesting clue. Using computed tomography, which meant that the mummy’s bandages were not needed to be removed, they found that the body had a fragile skeletal structure. Further detailed analysis led the researchers to believe the body was female due to the lack of signs of the male genitals.3D visualizations of the body clearly showed long, curly hair and mummy breasts.

The corpse found “fragile skeletal structure” made researchers suspect that it was a woman.

Ejsmond told CNN the woman is thought to die between the ages of 20 and 30 and the fetus is between 26 and 30 weeks pregnant.

“We don’t know the cause of death – further investigation will be needed,” he said.

One of the biggest questions scientists have is why the fetus, which has yet to be sexually determined, remains because its internal organs are routinely removed prior to mummification.

A mummy scan reveals that the fetus is still in the womb.

“All these findings intrigued the question of why it was not removed,” We don’t know why it was left there, perhaps for religious reasons, perhaps they thought that the unborn child had no spirit or that it was. It will be safer in the next world or maybe because it is very It is difficult to remove a child at that stage without causing serious damage. “

When Wkyk-Rudzki first brought the mummy to Poland in the 19th century, he suggested it was found in the royal tombs in Thebes.

But archaeologists are unsure of this or the mummy’s background.

Ejsmond explains: “We are not sure if it is true or not. It is common for people to give archaeologists a false background to add to their value and importance because it looks better, so we should pay attention to it. Be very careful about such statements, there is no reason for confirmation. “

The mummy may have been in the wrong grave, archaeologists believe.

This may be part of explaining why the mummy was wrapped up in a tomb with the priest’s name.

“This is one of the most complicated,” says Edgesmond. “We know that in ancient times, coffins were reused, sometimes cemeteries were robbed and stolen so they could be reused.

“During the 18th and 19th centuries, mummy tombs were ransacked and antiques merchants stole valuable items and changed their bodies.”

The mummies, part of a collection owned by the University of Warsaw, have been loaned to the National Museum in Warsaw since 2009. Fri 2460

According to Ejsmond, it is estimated that 10% of the mummies in the museum’s collection may be in the wrong coffin.

The team, which is investigating the collection of around 40 human and animal mummies, now hopes to collect small samples of the body for the cause of death.