Follow-up for COVID-19 in Alaska found 227 cases and no deaths were reported Thursday. 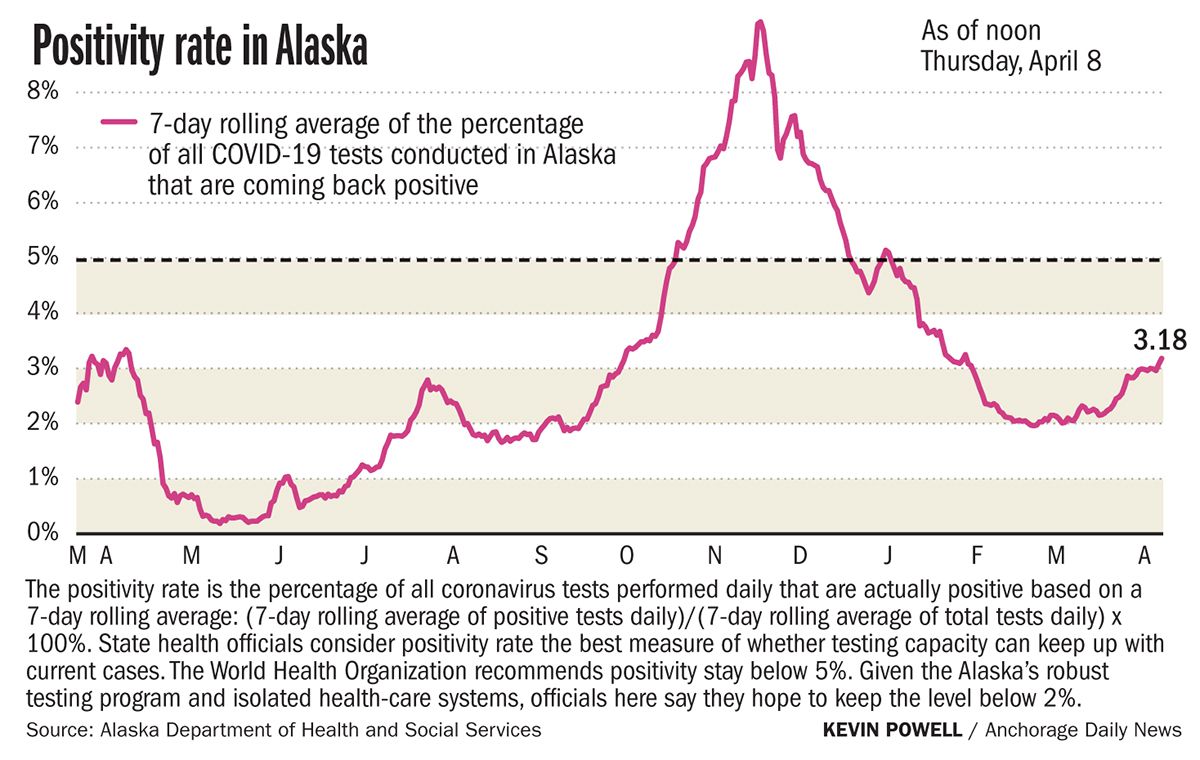 We are making this important information available without signing up for a public service. But we depend on our readers’ support to do this work. Please consider supporting independent journalism in Alaska for just $ 1.99 for the first month of your subscription.

Although the number of patients and hospitalizations in Alaska is still lower than they were, they peak in November and December. But the state’s average daily sickness rate has been trending higher in the past few weeks. Many regions in the state remain in the highest alert category, according to the current per capita infection rate.

So far, at least 75 cases of the five strains of the coronavirus have been identified through testing and sequencing efforts in Alaska, according to the latest weekly report from the state. Health workers continue to encourage Alaskan residents to wear veils in public places, avoid large gatherings, wash their hands frequently and get vaccinated against COVID-19 to prevent further epidemics.

Alaska in March became the first state in the country to grant immunization rights to anyone aged 16 or older who lives or works in the state. You can go to covidvax.alaska.gov or call 907-646-3322 to register for a vaccine appointment. New appointments are added regularly. Phone lines are staffed from 9:00 AM to 6:30 PM on weekdays and 9:00 AM to 4:30 PM on weekends.

By thursday 263,475 People – 43% of Alaska eligible for vaccination – have received at least the first time, according to at least the state’s Vaccine Monitoring Control Panel. 198,262 People – About 33% of Alaskan residents aged 16 and over are considered fully vaccinated.

By Thursday there were 41 people. Confirmed or suspected COVID-19 in hospitals across the state, below their peaks in late 2020, but part of a slight increase in recent weeks.

Of the 222 cases reported in Alaska residents on Thursday, there are 69 in Anchorage, plus two in Shu Chiak and 10 in Eagle River, five in Valdez; One of Anchor Point; Four in Kenai; One of the Nikiski; Four in Soldotna; Two in sterling; Three in Kodiak; 19 in Fairbanks, plus 16 in the North Pole. One in Houston; 16 in Palmer; 41 in Wasilla; One of the Nome; The one in Douglas; Four in Juneau; And two more shows in Sitka

Of the more than 1,000 smaller communities that are not named to protect privacy, there are two in the northern Kenai Peninsula constituency; One of the Southeast Fairbanks census areas; Six in Mat-Su Borough; Two in the Northwest Arctic region; Four in the Bethel Census area; And five more in the Cucilvac census area.

In addition, five cases were reported in non-residents: 1 in Valdez, 1 in Wasilla, 1 in Juneau, and 2 in the unidentified region of the state.

Although people may be tested more than once. But each case reported by the state health department is representative only.

State data did not specify whether people who tested positive for COVID-19 had symptoms. More than half of all infections in this country are transmitted from people asymptomatic, according to CDC estimates.

Of all the tests last week, 3.18% turned positive.

Oregon reports more COVID-19 cases daily than it had in several months.