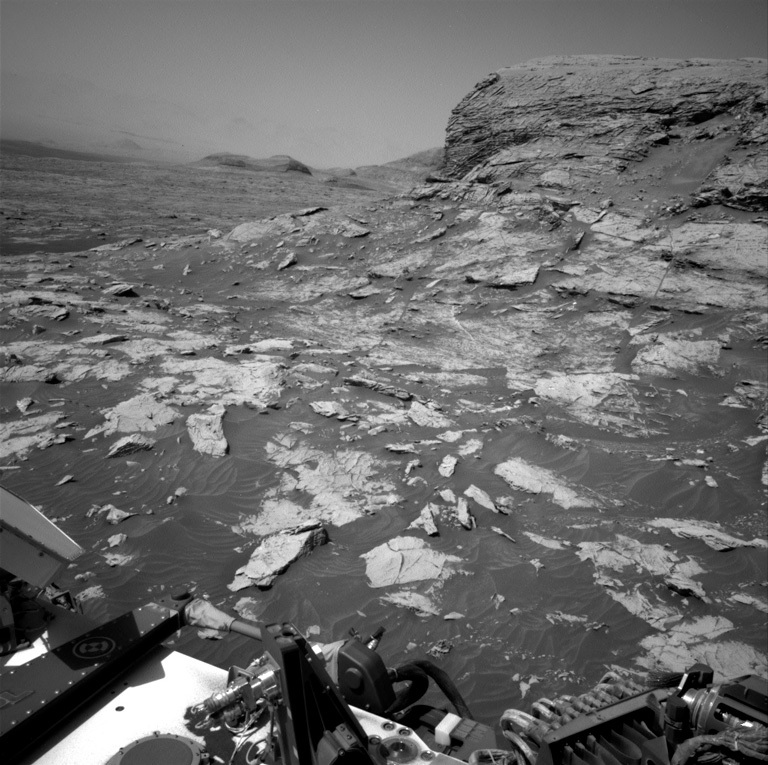 The Sol 3081 will be busy for the Curiosity. The rover is still close to a transition between “Glasgow” members and sulphate bearing units. As this is a major geological shift, the science team is trying to get as much information as possible before moving out.

First, the rover is planning to do a “touch and travel” to make long-distance scientific contact and targeting before driving it off. First, the Curiosity is exercised using APXS and MALHI observing “Puymangou”. Dark spots on the stone slab in front of the rover. Science will test whether color differences represent differences in elements relative to nearby rock formations.For Rover Planners (which I am currently one of), this is a challenging target because of its small size and lift. Slightly compared to the surrounding pieces of the stone. We must also avoid the immediate vicinity of the sand that is trapped by the roughness of the rock̵

7;s surface. After the arm activity, Curiosity keeps the arm in preparation for the ride.

Before driving out, there is a series of targeted scientific observations with Mastcam. In addition to a small 3×3 mosaic of Contact Science Targets, we take a large stereo mosaic of “Mont Mercou” from the direction. Southwest to get a greater view of the ridge sediment structure. In addition to all the pictures we took from other locations around Mont Mercou, this final set allows us to create a complete 3D model. In the same pre-drive time, ChemCam will also perform passive sky observations as part of our environmental suite.

We then say goodbye to Mont Mercou and start driving about 30 meters southwest. The terrain in this area is rocky and patchy of sand, which is another challenge for rover planners. Curiosity would have her wander around spiky rocks and bigger sand in order to land on a high spot, which should provide a good view for planning the next drive, as well as taking off. Park on rocky ground to activate contact science at the planned weekend.Rover Planners (and Curiosity’s Wheel) are looking forward to further south, where the terrain is more gentle and the dynamism of We don’t need to look like a slalom anymore.

After the drive, we will take a picture to support the next drive, as well as additional celestial observations and ChemCam calibration targets to further verify the integrity of the instruments. As we approach sunset, we will be doing another cloud observation with Mastcam and Navcam in the hope of another image of the cloudy sky of Mars and the MARDI image of the ground under the rover. Finally, the next morning we will be doing more environmental observations, including the Dust Devil Movie and the Movie Over the Horizon.

On the second day of the plan, we observed the atmospheric environment of the sun, the horizon, additional dust devil films, as well as the Mastcam at dusk.