The latest about COVID-19 in MN: moderately loaded cache. The hospitalization is reduced. 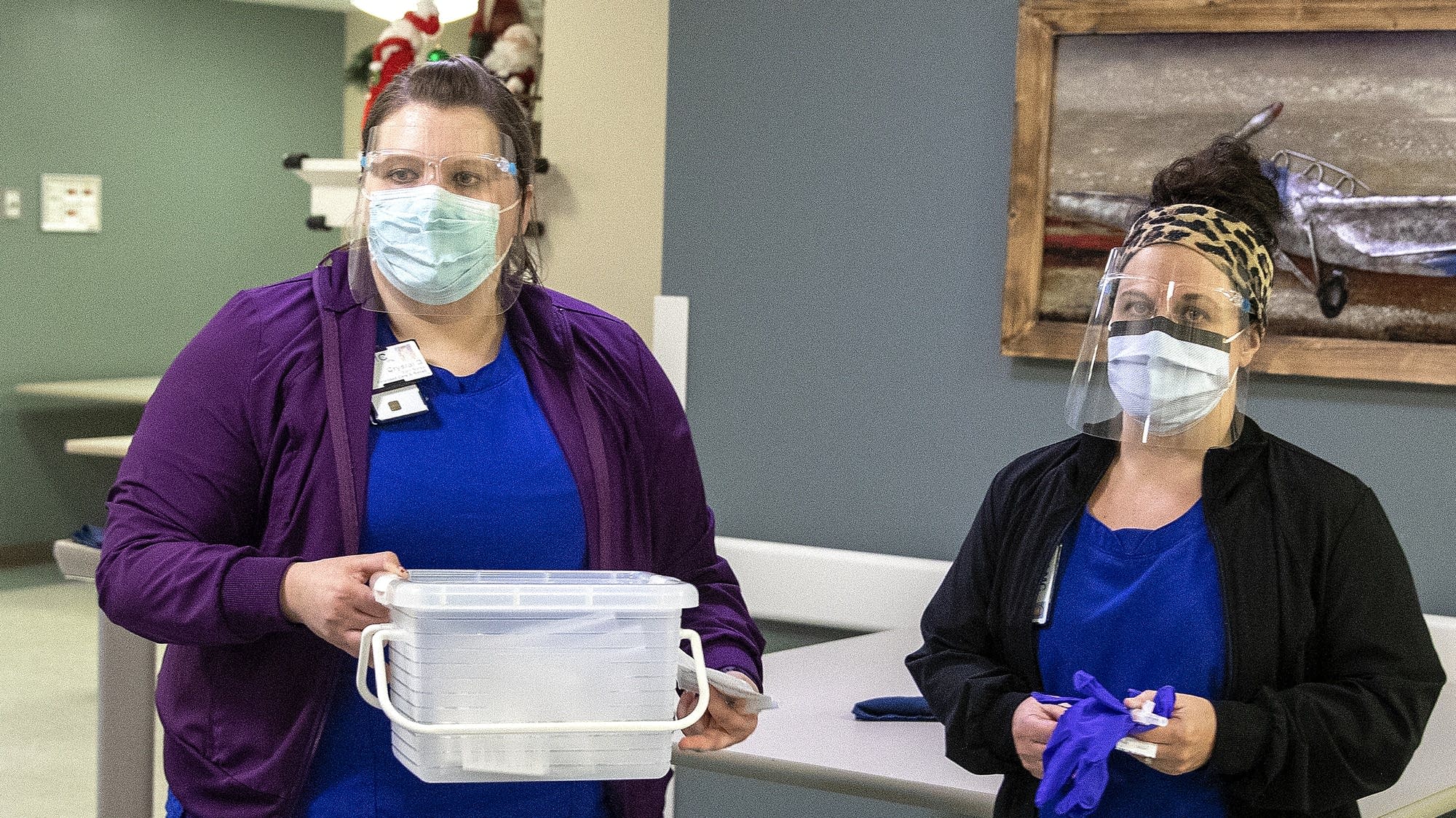 The state’s health leader is expected to summarize it to reporters at 2 p.m.

Minnesota’s newest COVID-19 data shows the state remains stable on the path of relatively moderate growth in new patients due to declining hospital admissions. Still, government officials believe it is likely to happen in the coming weeks after the year-end holidays.

On Wednesday, the health department reported 1,504 confirmed or likely new cases of the disease, along with 50 more deaths, marking the higher deaths over the past week. But the overall trend is still down after a spike in December.

There were 665 people in hospital with COVID-1

9 on Tuesday, 129 requiring intensive care. That number has fallen by more than half over the past four weeks. The new seven-day trend of hospitalizations has dropped to levels that were not present since late October.

Hospital admissions are now lower than what Minnesota saw on Nov. 1, but still higher than Oct. 1.

Even as they applaud past positive trends, health officials signal that another rise is expected. Wednesday’s data show that Minnesota’s confirmed cases have skyrocketed, albeit lower than last month.

Gov. Tim Walz said in mid-December, his COVID-19 watchdog was worried about February’s spike. On Monday, health commissioner Jan Malcolm leaned Minnesotans to view the daily deaths and the number of cases is likely to rise again.

“We expect to see the case back up in Minnesota after the year-end holidays and possibly a result of winter wear and more indoor time and more rallies,” Malcolm told AFP. correspondent

Overall, Minnesota’s COVID-19 routes were still difficult to chart because of reporting from those year-end holidays.

The case reported Wednesday put Minnesota at 440,354 in the epidemic. Of them, about 95 percent recovered to the point of no longer being isolated.

The new death reports increased Minnesota’s death to 5,774, among them approximately 64 percent of those who died receiving long-term care or assistance from living facilities. Most have an underlying health problem.

50 more new reports died # COVID19 today in Minnesota. But that’s down from 67 reports * last * on Wednesday, so this metric is still trending down the 7-day average, now there are 35 deaths / day, down from 44 / day last week. pic.twitter.com/tbIaSd4PzM

People in their 20s are still the age group with the highest confirmed cases in the state – nearly 84,000 since the outbreak began, including more than 44,000 among people ages 20 to 24. year

The number of young people confirmed in high school age has also increased, with more than 34,000 people aged 15-19 since the outbreak.

Although they are less likely to feel the worst effects of the disease and require hospitalization. But experts worry that youth and young adults will spread to elderly relatives and members of other vulnerable groups.

It is of particular concern as people can become infected with the corona virus and spread COVID-19 when they have no symptoms.

There have been quite a few bumps in new cases throughout the state.

Hotspots still pop up in rural areas relative to their population.

Caseloads are still the heaviest among blacks.

In Minnesota and across the country, COVID-19 has disproportionately attacked communities of color in both cases and deaths. That is especially true for the very widespread Minnesota of Hispanic descent.

Although the new cases unfolded from late November to the peak of early December, data showed that blacks were still the hardest hit.

Government mistrust, along with deeply rooted health and economic inequalities, has hindered efforts to increase testing between communities of color, officials said, especially among non-immigrant groups. Permission, who fear that their personal information may be used for deportation

‘Promise to deliver, not deliver’

Trump administration officials on Tuesday called on the state to expand eligibility to people 65 and older and those most at risk of developing the disease.

The administration also plans to begin distributing the vaccine based on the state’s 65-year-old population and their vaccination rates. The quantity is currently allocated based on the total adult population of the state.

So far, about 430,000 doses of the drug have been sent to Minnesota to healthcare providers and federal programs for long-term care in vaccination, according to the state’s new COVID-19 vaccination dashboard website. More than 150,000 Minnesota people have received at least one dose of the drug.

While Minnesota quickly welcomed the vaccine available to more people, it “promised not to be delivered,” state infectious disease director Kris Ehresmann told reporters on Tuesday.

The changed federal advice could add “two million people expected to be vaccinated” in Minnesota, she said. “If we only get 60,000 times a week, that would be a real problem.”

No further delivery or quantity arrived.

“We are ready to get more vaccines if the dogs really do meet their promises,” Ehresmann said now. There is no drug to take with that. “

Later on Tuesday, Gov. Tim Walz’s office said the US Department of Health and Human Services had agreed upon the request of Minnesota and eight other states to release. “Millions” suspended for distribution The exact supply amount that will go to Minnesota, although no details are given.

Development around the state

MN will be in a state of calm emergency for at least another 30 days.

The state will remain in an emergency state of calm for at least another 30 days.

Tim Walz has extended his COVID-19 administration with the approval of the State Council of Positions. The announcement he first issued in March gave his administration the ability to tackle the outbreak. But there are also critics who say it should consult the legislature more directly.

“Conditions are still very fragile and volatile. Of course, we can see and honestly expect to see a steady increase in the event of a slight improvement in economic activity and social interaction, ”Malcolm said.

Minnesota is making some changes to the phone alert system used to track COVID-19.

The change affects many Apple iPhone users, state information technology agency MNIT said this weekend that users with newer operating systems will be prompted to enable the disclosure notification by: No separate COVID-19 app is required.It is part of a widely used technology developed by Apple and Google that can be integrated into the phone’s operating system.

This service offers the same features as an app, using bluetooth technology and a randomly assigned number to detect others nearby and share it anonymously later if either party reports the results of the COVID test. -19 positively, the new version, just like the app, does not collect personal information or track location.

The school is ready to open again. But the teacher was not vaccinated: Teachers from some of the state’s largest school districts voiced concerns about returning to self-teaching, noting that they had not yet been vaccinated during the spread of the COVID-19 virus.

As Minn went through the first round of vaccination, some carriers were concerned about being abandoned: Minnesota is entering the final phase of its first COVID-19 vaccination, but providers such as residential substance abuse treatment centers and mental health providers say they remain murky about when and where. Where their staff are vaccinated

Minnesota disabled people suspected of receiving the COVID-19 vaccine: Among people with disabilities are often disproportionately affected by the epidemic.

You make it possible for MPR News.Personal donations are behind the clarity of coverage from our journalists across the state, stories that connect us, and point-of-view conversations. It ensures MPR remains the resource that brings Minnesota residents together.

The CDC study found that approximately 78% of hospitalized people were overweight or obese.

The CDC says people who get the full vaccine can reunite without wearing a mask.

The CDC says people who are fully vaccinated can get together in small groups without a mask.